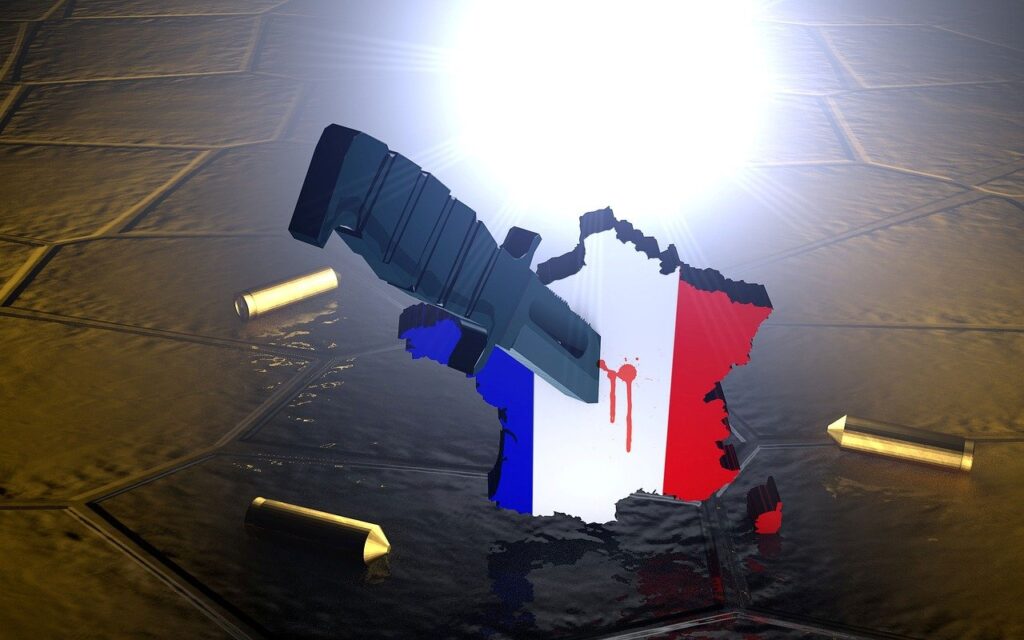 For the first time in the Macron era, the French president expressed himself in the phrase “Islamic terrorism” • Macron presented earlier this month a plan to defend France’s secular values against extremist Islam • France finds it difficult to recognize the problem

The beheading of a history teacher at a school in a suburb near Paris shocked all European capitals. Following the shocking and barbaric act, the French are frightened and their fear stems mainly from the helplessness of the authorities in the face of Islamic terrorism.

President Emanuel Macron arrived at the murder scene just hours after the attack. For the first time he pointed out characteristics of Islamic assassination. To this day, the French authorities and all presidents have hesitated to call those responsible for the wave of terrorism Islamic terrorists in the full sense of the word. This is definitely a significant and precedent step in the right direction.

In recent years, we have often warned about the danger lurking in Europe and France in particular, but the authorities have preferred to turn a blind eye for various and bizarre reasons and electoral considerations.

Last month, two journalists were stabbed outside the former offices of satirical magazine Charlie Hebdo. At that time the trial of those responsible for the January 7, 2015 attack was carried out. 11 Frenchmen have been murdered since then, including 6 brave journalists who dared to draw and distribute cartoons of the Prophet Muhammad.

The terrorist this time was an 18-year-old Chitsani who was born in Moscow and has a criminal record. We emphasize that since the attack in March 2012, by Muhammad Marah, all the terrorists were Muslims from North Africa and French nationals who had already served sentences but were released from prisons without further police surveillance. 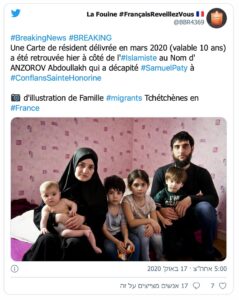 We will also mention that Muhammad murdered 7 people, among them a father of a Jewish family and his three children at the entrance to the Otzar HaTorah school in the city of Toulouse. Then, like today, the terrorist was known to the police. Even then, as today, it was said that he was a “lone wolf” and that it was difficult to predict his actions. Since then, however, no serious surveillance of suspects has been carried out.

Macron unveiled earlier this month a plan to protect France’s secular values ​​against radical Islam – and announced plans to implement stricter oversight of the curriculum and foreign funding for mosques. There have been similar plans in the past, but they have not been implemented to date.

The French authorities and even the media are trying to explain the motives for the wave of terrorism in light of the fact that the religion of Islam is in crisis and the state is committed to helping and assisting in reconstruction. In their view, economic and social opportunities should be offered to immigrant communities, but in reality they ignore the extremists and their threats. 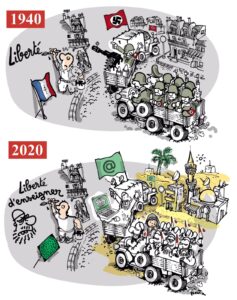 A cartoon by @plantu: “A teacher who was murdered because he taught the freedom to think, say, believe, write and draw. This freedom is at the heart of our history, our identity, our culture, and it is under attack. ” // From the French Lemond

While France has some of the best secret services in the world. They thwart terrorist attacks, also thank to the intelligence information they receive from Israel, but as long as there is no drastic change in policy and on all levels, including legal deterrence – the incidents will continue and be much more deadly and shocking.

The uniqueness of the attacks stems from the basic fact: the threat of terrorism is not external, the enemy does not reside outside the borders of the country as it has always been throughout history. The war on terror is internal and originates among the French people.

President Macron has chosen to fight terrorism very far from his country. He continues to fight without much success against the jihadists in Mali where 5,000 fighters were stationed. At the same time, the release these days of a 75-year-old French hostage in exchange for a ransom for jihadists has provoked much outrage in public opinion. The woman who worked for humanitarian purposes hid that she had converted to Islam and her intention to return to Mali. Worse still, it turned out that the mediator from Mali released 200 jihadists who were being held in prisons. 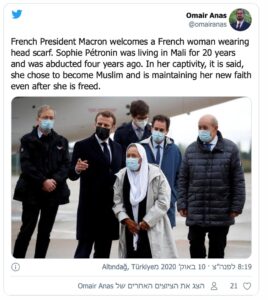 Battle-learning France does know how to commemorate and glorify its heroes as well as its victims. It is clear, however, that the official ceremonies held after the tragic attacks will not deter the terrorists. There is also an impression that the French government is trying to divert attention from the main thing – not in the war on terror itself but in commemorating its victims.

To this day, the French authorities are struggling to cope with the waves of Islamic terrorism despite all the measures taken so far: a state of emergency has prevailed in the country for 719 days, and a drastic law passed in parliament in November 2017.

The latest attack once again revealed that the French authorities are trying to hide important information from the public. They insist on using unique terminology, in various terms in the French language with the sole aim of avoiding explicitly defining what is a terrorist act and who is a terrorist.

In any move made after a terrorist incident they also refrain from explicitly saying that all the attacks were carried out by Muslim terrorists. The French police are also not doing enough against Islamic radicalization in mosques as well as in prison. There are more than 25 “Islamic brainwashed” in France today who refuse to “return to the good” and adapt to society. Even then as today it was said by the authorities that “the suspect was known to the police for petty offenses and no traces of him were discovered, no signs of religious extremism”, “he was known for drug possession, we could not say he was an extremist who could carry out an attack Act alone. ” This is the erroneous and repetitive approach in every event since the beginning of the wave of terrorist attacks.

It should be noted that France is a secular state that separates religion from state and in every census there is no trace of the religion of the citizen ‘so it is impossible for them today to say explicitly that it was a Muslim who carried out the terrorist act. The presence of 8 to 10 million Muslims in France greatly influences decision-making at the political level, also in the intelligence aspect. It should be noted that unlike Germany where the majority of Muslims are Turks or England most of whom are from India and Pakistan, in France the vast majority are of North African descent, from Morocco, Tunisia and Algeria. Turkey’s takeover of Libya with its militias further endangers France, especially in the face of deteriorating relations between Ankara and Paris.

As far as Israel is concerned, it should be mentioned that in the 1970s with the establishment of the PLO, France accepted the terrorist acts and hijackings as a legitimate means in the political struggle to achieve the goal.

It also allowed the PLO to open a diplomatic mission in Paris and turned a blind eye even if weapons and ammunition were transferred through the diplomatic suitcase. To this day, she is debating the separation of the political and military arm of the Hezbollah organization. It takes Hezbollah leaders in the Lebanese government for granted, ignores its destructive military power, the clear policy of terrorism it is sowing throughout the region, and its threats to destroy the State of Israel with the help of Iran.

This is how France acted towards the PLO terrorist organizations in the 1970s, and this is how it acts today with regard to Hamas, which is portrayed in their eyes as Hezbollah and the Muslim Brotherhood, as social movements that care about education and charity. She is also wrong and misleading when she continues to believe that the next day the solution to the Palestinian problem will be completely stopped by all hostilities and terrorism in Europe.

Palestinian terrorism is not fundamentally different in the worldview and patterns of action of Islamic organizations operating in Europe today. These and these reveal a deep and ingrained anti-Semitic resentment. They also deny the Holocaust and openly call for the extermination of the Jews. The only difference between them is due to the emphasis on the religious-jihadist aspect, but their purpose is the same towards the entire West.

As in a state of war, terrorism must be fought to the bitter end, while at the same time the fundamental values ​​of an enlightened democracy must be preserved.

After the beheading of a history teacher and a string of injuries against journalists, enlightened France can no longer be silent. It must respond with all its might against attempts to undermine the cornerstones of democracy, freedom of expression and education.

It is to be expected from France that it will finally change its position and start fighting terrorism with other and more sophisticated tools as Israel has done over the years. Meanwhile, President Macron must declare an open and total war on Islamic terrorism.

Although we are disappointed with French diplomacy towards us and especially on the issue of the conflict with the Palestinians, we are of course united today with the French people in their fight against terrorism and strengthened by President Macron and the authorities. Israel will always be willing to advise and assist friends.