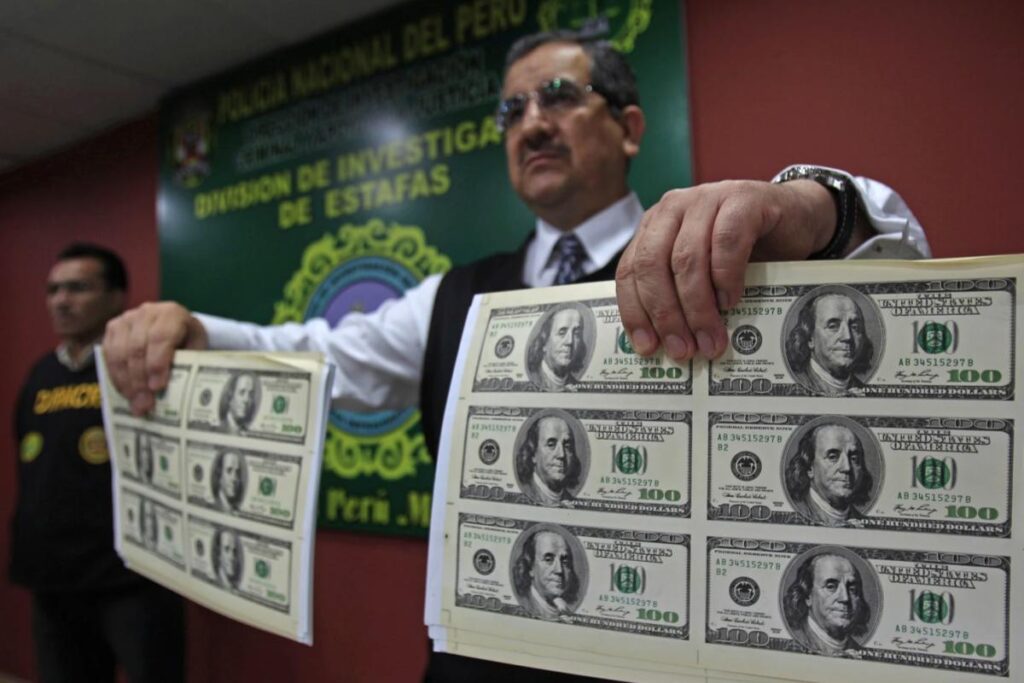 A wave of fake or modified US dollars, usually in small bills, has been flooding Venezuela and Ecuador, with authorities seemingly at a loss about how widespread their use has become or the impact they might be having on the economy.

While for Venezuela, most of these appear to come from Colombia and Peru, entrepreneurial gangs in Ecuador have begun producing their own fake bills, benefiting from the fact the US dollar is already legal tender there.

InSight Crime looks at how the two countries differ in their approach to this growing problem.

The Ecuadorian National Police and the United States Secret Service have seized over $7 million in counterfeit bills so far in 2022, according to Ecuadorian Newspaper Primicias. The seizures represent a value increase of almost 3,000 percent over the same period in 2021.

The news comes on the tail of several anti-counterfeiting operations in Ecuador this year. In August, authorities dismantled a counterfeiting production center in the province of Santo Domingo de los Tsáchilas, according to a tweet from the National Police. The four Ecuadorians and one Colombian arrested were using high-quality manual printers to produce 20-, 50- and 100-dollar bills, Ecuadorian newspaper La Hora reported.

In February, Ecuadorian National Police arrested four people in Saraguro, Loja province, for their role in counterfeit bill manufacturing and distribution, according to Ecuadorian newspaper El Telegrafo. The printing machinery was smuggled in from Colombia piece by piece and reconstructed in Ecuador, according to the newspaper.

Printing operations are typically located in rural areas, as machines are noisy and easier to detect in populated areas, Major Saúl Villafuerte, chief of operations of the National Police Anti-criminal Brigade, told Primicias. Additionally, he added that counterfeit money is more common in rural areas, as residents need cash in most transactions

Ecuadorian-produced counterfeit bills are sold directly to the country’s gangs, according to La Hora. Fake dollar’s actual value is approximately 10% of the nominal value, meaning a phony $20 bill is sold for $2 by the counterfeiters.

Gangs use counterfeit money to offer illegal loans to micro and small businesses that do not have access to credit from the country’s banks. Gangs will employ extortion schemes when businesses cannot pay back these loans or seize the business property as collateral, reported La Hora.

Venezuelan authorities have repeatedly warned the public about the spread of these bills, reaching a peak since September. Douglas Rico, the head of Venezuela’s criminal investigation unit (Cuerpo de Investigaciones Científicas, Penales y Criminalísticas – CICPC), recently wrote on Twitter about “many fake bills” being found throughout the country.

The most common form of falsification sees legitimate $5 bills modified to look like their value is of $50, according to a report by Venevisión. Others are entirely faked.

“They’re generally being used on the street … where there are no electronic means to detect false bills,” Luis Godoy, a former police commissioner with the CICPC, told InSight Crime. “People on the street have no way to apply information about how to identify fake bills if they don’t have the machine.”

While the government has provided tips on how to detect them, these bills have spread widely in the country at a time when the use of the US dollar, instead of the Venezuelan bolívar, has been a shot in the arm for the country’s battered economy.

And the dismantling of a counterfeit money ring in Colombia provided insights into how these bills enter Venezuela. The group was caught with over $622,000 in fake bills which were to be sold to criminal clients in Venezuela and Central America. According to Colombian police, the fake bills cloned bank seals and other safety elements to pass detection, with every false 100-dollar bill being sold for 45,000 Colombian pesos (around $10).

The devaluation of the bolívar, the difficulty of using credit cards, and the widespread use of the dollar made Venezuela perfect for a fake dollar boom, said Ronald Balza, an economist from the Andrés Bello Catholic University in Venezuela, in an interview with El Aragüeño.

Ecuador and Venezuela are facing two different facets of the same criminal economy.

Ecuador’s increasingly dollarized economy creates fertile ground for counterfeit currency, and homegrown criminal groups are keen to enter the criminal economy after years of depending on neighboring countries. It has also been successful in seizing millions of locally produced fake dollars and understanding the full scale of its counterfeit currency problem.

Meanwhile, Venezuela has foundered. While its economy has returned to growth, the widespread nature of this scam and the impossibility of tracing the bills make it tough to estimate how much economic damage this might be having.

While the CICPC has spoken about receiving four or five complaints related to false dollars a month, the true scale is far larger. Warnings about false dollars have been seen in almost all of Venezuela’s major cities, reported Globo News.

And while Ecuador’s local production of fake dollars allows law enforcement to more successfully respond, Venezuela’s dollars still largely come from Colombia and Peru. These two countries have dominated false-dollar production for years, according to the US Secret Service.

“They have had great expertise for many years about the falsification or modification of paper currency,” Godoy told InSight Crime. “They bring it in the same way as with drug trafficking, through the border, by land or by plane and they flood the Venezuelan market.”

October 13, 2022 Published by The InsightCrime.