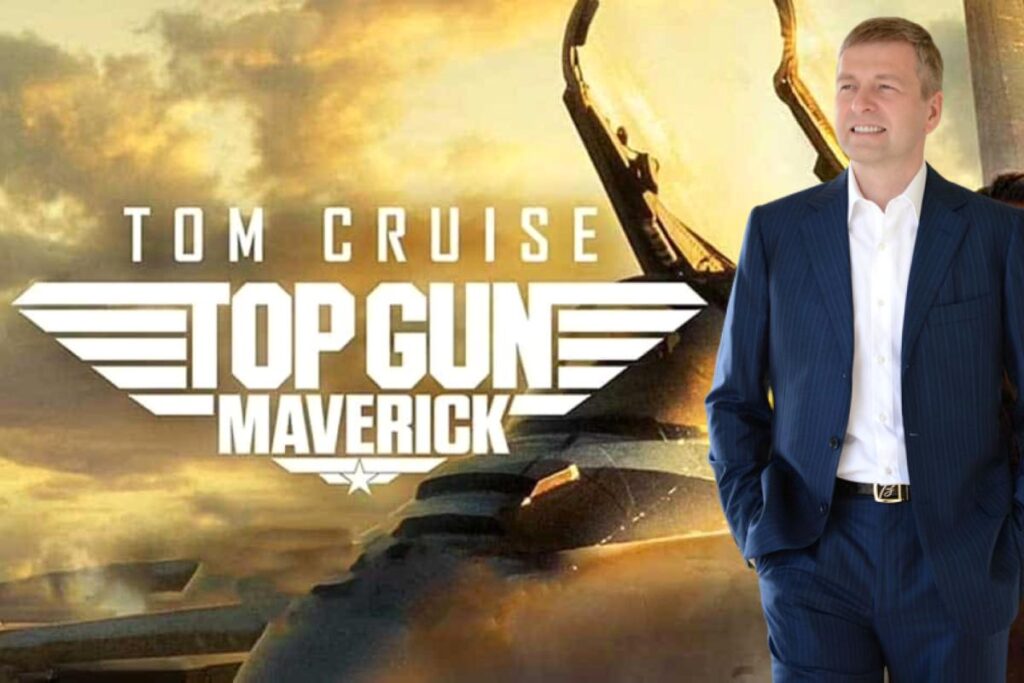 A Russian billionaire under investigation in Switzerland helped to finance the Tom Cruise blockbuster Top Gun: Maverick, a US lawsuit has revealed. Dmitry Rybolovlev is said to have exercised “functional control” over a production company that signed a $200 million deal in 2020 with the Hollywood giant Paramount Pictures to fund up to a quarter of the budget of ten films.

The deal with the production company, New Republic Pictures, was a welcome boost for Paramount when the Hollywood giant was struggling with a fall in revenues and cinemas closing because of the pandemic.

According to documents lodged with the Los Angeles superior court, Rybolovlev moved his assets out of the venture after Russia invaded Ukraine last February and western governments began imposing sanctions.

Two years ago, when the pandemic plunged the movie industry into one of its darkest periods, New Republic Pictures and its founder and chief executive, Brian Oliver, were touted as a bright light.

As movie theaters shuttered, toppling a significant chunk of Hollywood revenue, and studios scrambled to find alternatives that would allow them to release their movies and recover their investments while looking for new financing options, New Republic signed a more than $200-million deal with Paramount Pictures to fund up to a quarter of the budgets on 10 movies, including “Top Gun: Maverick,” in exchange for a share in any profits or losses from the movies.

The New Republic deal provided something of a lifeline: mitigating Paramount’s risks while bankrolling eagerly anticipated films such as “Coming 2 America” and the “Mission: Impossible” sequels.

But now, the Los Angeles production company’s alleged financial ties to Russian oligarch Dmitry Rybolovlev and the Russian invasion of Ukraine are at the center of a legal dispute that has raised questions about New Republic’s funding.

Bradley Fischer, New Republic’s former president and chief content officer, filed a lawsuit in Los Angeles Superior Court last Thursday for breach of contract, alleging that while he was negotiating a two-year extension on his contract, New Republic changed course and proposed new, less favorable deal terms. The turnabout was triggered, he claims, when Rybolovlev moved his assets out of the venture after Russia invaded Ukraine and Western governments began imposing sanctions on wealthy Russians.

Rybolovlev and his representatives were not immediately available for comment.

An earlier version of this post said Bradley Fischer was wrongfully terminated in July. He was terminated without cause in June.

Fischer alleges that when he refused the new terms, he was terminated without cause in June 2022. He contends he is owed over $15 million.

Representatives for New Republic and Brian Oliver were not immediately available for comment.

While the crux of the lawsuit is a contract dispute, it provides a glimpse into the opaque world of film financing. The filing alleges that Russian billionaire Rybolovlev played a role in funding “Top Gun: Maverick” and a slate of other major Paramount films.

According to the suit, in 2019, Oliver courted Fischer, a producer with a string of credits to his name including “Zodiac” and “Shutter Island,” to head up New Republic. The two producers had worked together on the 2010 film “Black Swan,” which received five Oscar nominations including best picture and a lead actress win for Natalie Portman.

Oliver first formed New Republic in 2017 “to produce feature films and television shows with top talent and large budgets,” the suit contends. Previously, Oliver, a veteran film producer, had partnered with Paramount on individual, nonfranchise projects such as the Elton John biopic “Rocketman.” The New Republic venture would catapult Oliver into a much bigger moviemaking stratosphere.

During a meeting in Los Angeles in the fall of 2019, Fischer was told that the company “intended to finance and produce at least four wide release films in 2020 and six the following year with budgets ranging up to and above $100 million,” with the output primed to increase in subsequent years, claims the suit.

In public remarks, Oliver said that his ambitions for New Republic had solid financial footing. A month after signing the Paramount deal, he told The Times that the company was funded by wealthy individuals based in Monaco and Spain.

That funding, according to the lawsuit, was largely bankrolled “with financial backing from Russian oligarch and silent partner, Dmitry Rybolovlev.”

“Rybolovlev acted and acts through a series of agents, affiliates, and subsidiaries, including among others his emissary, Valerii An and a company called Amber US Subsidiary, LLC. Through these intermediaries, Rybolovlev has, at all relevant times, exercised functional control over New Republic,” the suit alleges.

Rybolovlev, whose net worth Bloomberg has estimated at $10.1 billion, is based in Monaco. He built his fortune in Uralkali, Russia’s major producer of potassium fertilizers, during the 1990s privatization era of the former Soviet Union. In 2010 and 2011, he sold his stake in Uralkali and another fertilizer company for $7 billion.

The billionaire mining magnate owns a vast portfolio of real estate and yachts and a stake in the Bank of Cyprus. He is the current majority owner of the professional football club AS Monaco.

One of the world’s top art collectors, Rybolovlev owns a number of great works including pieces by Pablo Picasso, Henri Matisse and Mark Rothko.

Rybolovlev is no stranger to making headlines — or controversy.

For years, Rybolovlev was involved in a protracted legal battle with the Swiss art dealer Yves Bouvier. Rybolovlev accused Bouvier, who over a dozen years purchased some 38 artworks for $2 billion, of defrauding him.

Among the artworks in question was the painting “Salvator Mundi,” a depiction of Christ attributed to Leonardo da Vinci whose authenticity has been questioned. In 2017, Rybolovlev sold the painting through Christie’s in New York to a mystery buyer for a record-shattering $450.3 million. It was later revealed that the buyer was a Saudi prince.

Bouvier was arrested in 2015 after Rybolovlev filed a criminal complaint against him in Monaco.

In 2020, the charges against Bouvier were dismissed when a Monaco court upheld a lower court’s ruling citing that “the investigations had been conducted in a biased and unfair manner under conditions which seriously and lastingly compromised the balance between the parties,” according to the New York Times.

According to Fischer’s lawsuit, Rybolovlev’s money has been pivotal to New Republic’s activities.

Fischer alleges that after he joined New Republic in 2019, the company had a string of successes, becoming a co-producer and co-financier on several high-profile feature films, including “Top Gun: Maverick,” “Mission: Impossible 7” and “The Tomorrow War.”

The successful run prompted Fischer and New Republic in May 2021 to agree to extend his initial two-year contract for another two years and, in principle, to replace Fischer’s bonus arrangement with a grant of equity.

However, in February 2022, as the parties hammered out a new agreement but before the deal was formalized, Russia invaded Ukraine.

Last March, President Biden imposed sanctions on more than a dozen Russian oligarchs and their families following the invasion. As the Russian war continued, multinational governments moved to further impound and seize assets, bank accounts and properties from sanctioned individuals.

It was during this time that Rybolovlev “moved to minimize his exposure” and “began to withdraw his business operations from the west. Of particular relevance here, he pulled back from the movie industry,” according to the complaint.

In order to accommodate Rybolovlev’s “consolidation of assets,” the company “began demanding that Fischer relinquish rights that could have hampered a sale of the company or its assets,” according to the suit.

Fischer claims the new, proposed terms “had the potential to reduce significantly the value of his contract with New Republic, particularly in the event of a sale and/or Fischer’s termination from the company.”

The lawsuit indicates that “silent partner” Rybolovlev’s funding of New Republic is significant and raises questions about the venture’s full financial picture.

The full scope of Rybolovlev’s financial involvement in New Republic, as well as the full details of the company’s arrangement with Paramount, is unclear. Portions of the lawsuit are redacted. Fischer filed a motion to place the complaint under seal along with a fully redacted copy of the co-financing and distribution agreement with Paramount, citing a confidentiality provision.