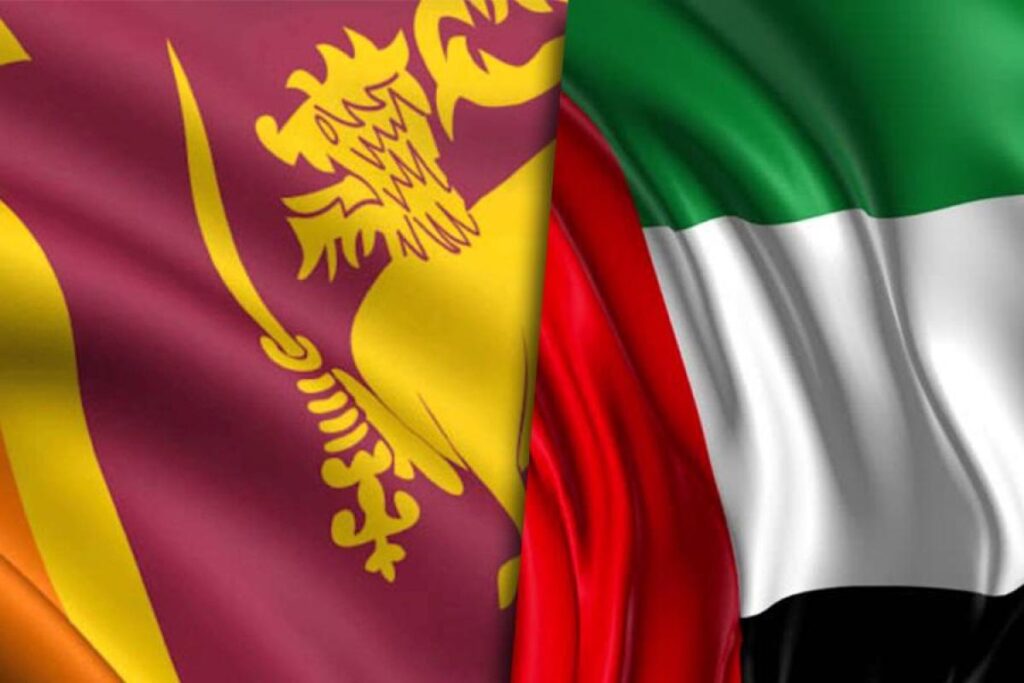 With furor over the powerful family’s riches at a fever pitch, foiled escape to Dubai spotlights special relationship to the emirate. Protestors occupy the Sri Lankan prime minister’s office compound in Colombo on July 13, 2022, amidst the ongoing economic crisis.

When embattled Sri Lankan President Gotabaya Rajapaksa attempted to flee his country in the face of economic and political crisis this week, he chose the United Arab Emirates as his preferred destination, underscoring the ruling Rajapaksa family’s ties to the Persian Gulf financial hub.

Rajapaksa and some of his relatives, including a former finance minister, were stopped from boarding flights to Dubai, the UAE’s commercial center, on Tuesday as protesters surrounded the airport, CNN reported. Rajapaksa was expected to resign today, but instead fled to the Maldives on a military jet, with some media speculating that he may head to Dubai at a later stage.

The vast wealth of the Rajapaksa family, who have dominated the country’s politics for nearly two decades, became a flashpoint in massive protests that have engulfed the country since March as Sri Lanka faces critical shortages of fuel, medicines and other goods partly triggered by years of mismanagement of state funds. A series of top political resignations left the president and his brother, then-Prime Minister Mahinda Rajapaksa, further isolated. The mass demonstrations culminated in hundreds of protesters occupying the palaces of the president and prime minister on Saturday, partying at the estates and setting the latter on fire in recent days.

The hidden assets of some Rajapaksa family members were revealed last fall in the Pandora Papers, a global investigation of offshore finance led by the International Consortium of Investigative Journalists. The documents revealed how Nirupama Rajapaksa, a scion of the ruling family, and her husband, businessman Thirukumar Nadesan, had used secretive shell companies and trusts to accumulate more than $18 million in tax havens, and own artworks and luxury properties in London and Sydney.

The Pandora Papers documents, leaked from 14 offshore service providers, show that the couple has secret ownership ties to UAE properties as well.

Included in the leak of 11.9 million confidential files are utility bills, a UAE resident identity card and other records showing that, as of 2019, Nadesan and the couple’s two children were residents of Dubai. The documents link them to an apartment in a luxury residential skyscraper but don’t say whether the family owns the property.

Nadesan, identified in the files as the manager of a Dubai-based asphalt trader in 2016, also listed another Dubai address as his residence in an application to open a bank account for one of his shell companies.

Nirupama Rajapaksa is related to both Gotabaya Rajapaksa and his brother, Mahinda, who over the years have exchanged top posts, including president and prime minister until recently, when both were forced to step down amid the economic crisis

Following the Pandora Papers revelations about the couple’s offshore holdings last October, President Rajapaksa announced his government will look into the matter and the Commission to Investigate Allegations of Bribery or Corruption launched an investigation. But the probe stalled, according to Sri Lankan media which cited banks’ delay in providing information about Nadesan and Nirupama Rajapaksa’s accounts.

In the meantime, she has traveled to Dubai at least once, Sri Lankan newspapers reported. Their son, who resides in the emirate according to the leaked records, often parades his luxurious lifestyle in the Gulf in selfies published on his Instagram channel.

A rising hideaway for powerful exiles

In recent years, the UAE has become a popular destination for oligarchs and criminals who seek a safe haven to hide their wealth after other offshore jurisdictions introduced more controls under pressure from the international community.

As part of the Pandora Papers investigation, ICIJ documented how the confederation of seven sheikdoms offers shell companies that mask their real owners’ identities, dozens of internal free-trade zones that provide even more shadows for them to hide in, and a regulatory system known for what anti-corruption advocates call its “ask-no-questions, see-no-evil approach” to dealing with money tied to gold smuggling, arms trafficking and other crimes.

Researchers at the EU Tax ObservatoryEU Tax Observatory, a think tank, estimate that about 27% of Dubai’s real estate market is owned by foreigners, including individuals from conflict-ridden countries and countries under autocratic rule.

As of 2020, at least 408 Sri Lankan nationals owned 590 properties in Dubai valued at $205 million in total, according to the Observatory’s report based on confidential property data.

In March, the world’s main anti-money laundering watchdog placed the UAE on its “gray list” of countries that need extra monitoring. The Paris-based Financial Action Task Force said the country needed to strengthen its ability to pursue high-risk money laundering threats and demonstrate a “sustained increase” in effective money laundering investigations and prosecutions.

Investigators working for previous Sri Lankan administrations, which briefly replaced the Rajapaksas’ rule between 2015 and 2019, accused members of the Rajapaksa family and associates of stashing hundreds of millions of dollars in Dubai bank accounts. They have denied the allegations.

July 13, 2022 Published by The International Consortium of Investigative Journalists.