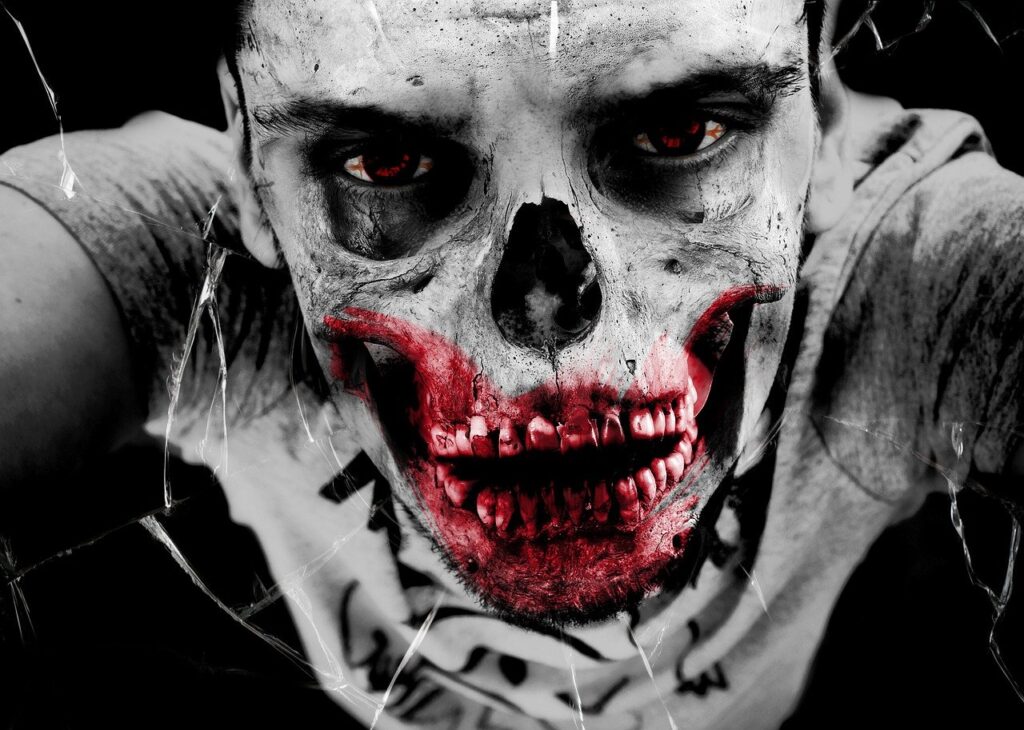 Following the fall of the elected Afghan government and rise of the Taliban in its place, many speculated that the group had or may turn to cryptocurrencies as a way to finance its operations. As part of our compliance program, Coinbase tracks these types of transactions and often works with law enforcement agencies around the world on interdiction and enforcement efforts.

After conducting an exhaustive analysis of global crypto transactions, our Coinbase Special Investigations Team is sharing its findings below. To conduct this research, Coinbase relied on cryptocurrency data analyzed by Coinbase Analytics across various blockchains. This data study provides a holistic overview of terror funding using cryptocurrencies across the entire industry and is not limited to Coinbase.

A quick step back

With institutional and consumer interest in crypto at an all-time high, alongside the continued rise of DeFi, 2020 and 2021 have seen cryptocurrency achieve the mainstream adoption that the space has anticipated for many years.

While the industry has come a long way since Satoshidice, Mt. Gox, and the Silk Road, illicit activity has dwindled but not fully ceased. However, representing far less than 1% of all activity in the crypto space in 2020, illicit activity is no more of a concern for the cryptoeconomy than it is for the traditional financial system.

Further breaking down illicit activity, we find that transactions associated with terrorist financing (TF) in 2020 made up less than 0.05% of all illicitvolume. As such, terror funding in cryptocurrencies remains extremely low in overall terms.

Nevertheless, so long as any organization thinks it can use crypto for TF, we are committed to proving them wrong. To that end, we provide this update on our ongoing work.

Our Coinbase Special Investigations team focused its research on the largest TF-related organizations’ fundraising efforts over the past few years.

Assessing these organizations’ fundraising over time, we find that Hamas has raised the most funds, by far. This is likely because Hamas actively solicits donations primarily in the form of BTC on their website and related Telegram channels. 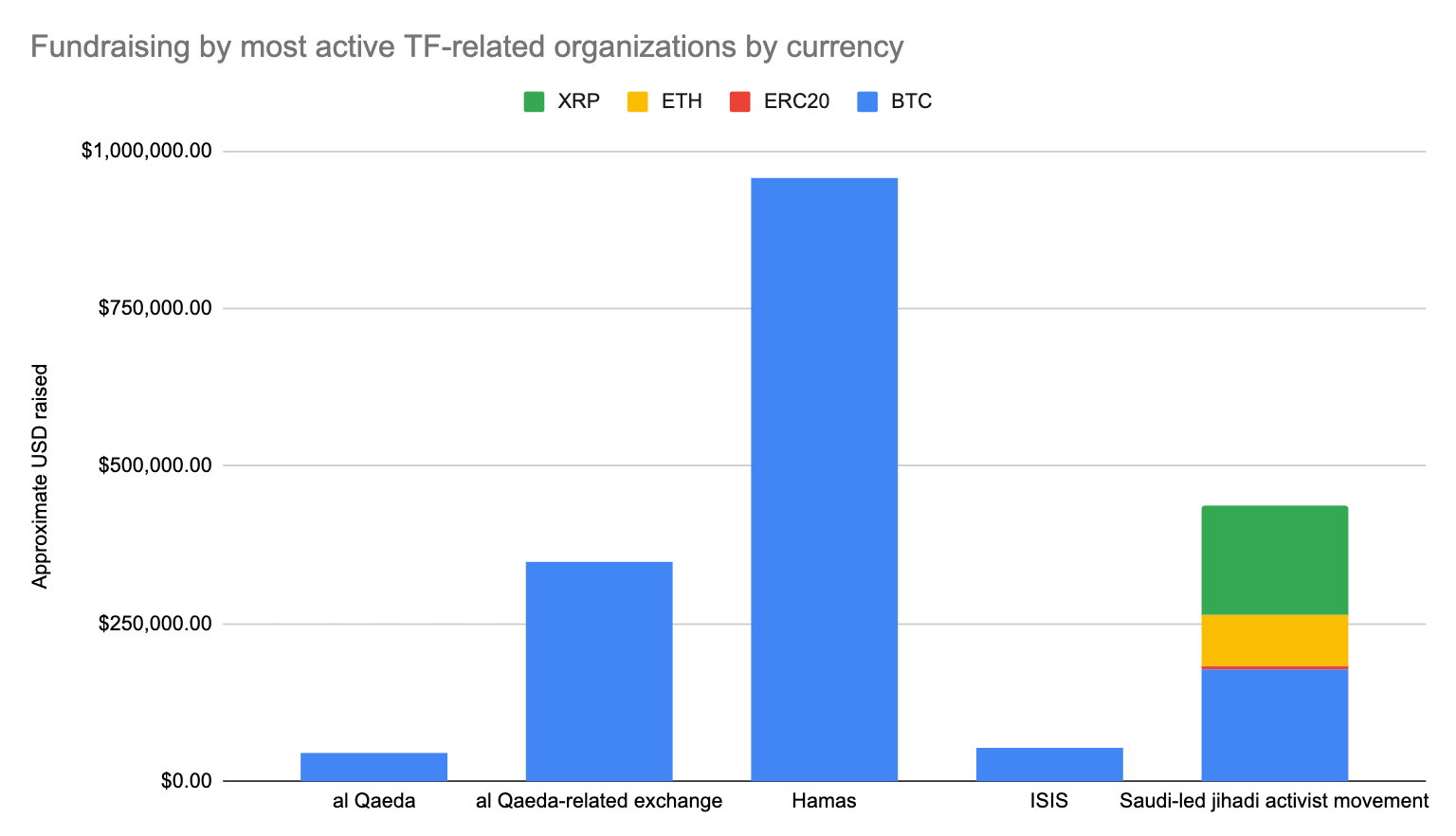 Changes to fundraising efforts per organization over time

Periods of intensified fundraising activities by Hamas appear to correlate to the time frames of the most intense geopolitical conflict. 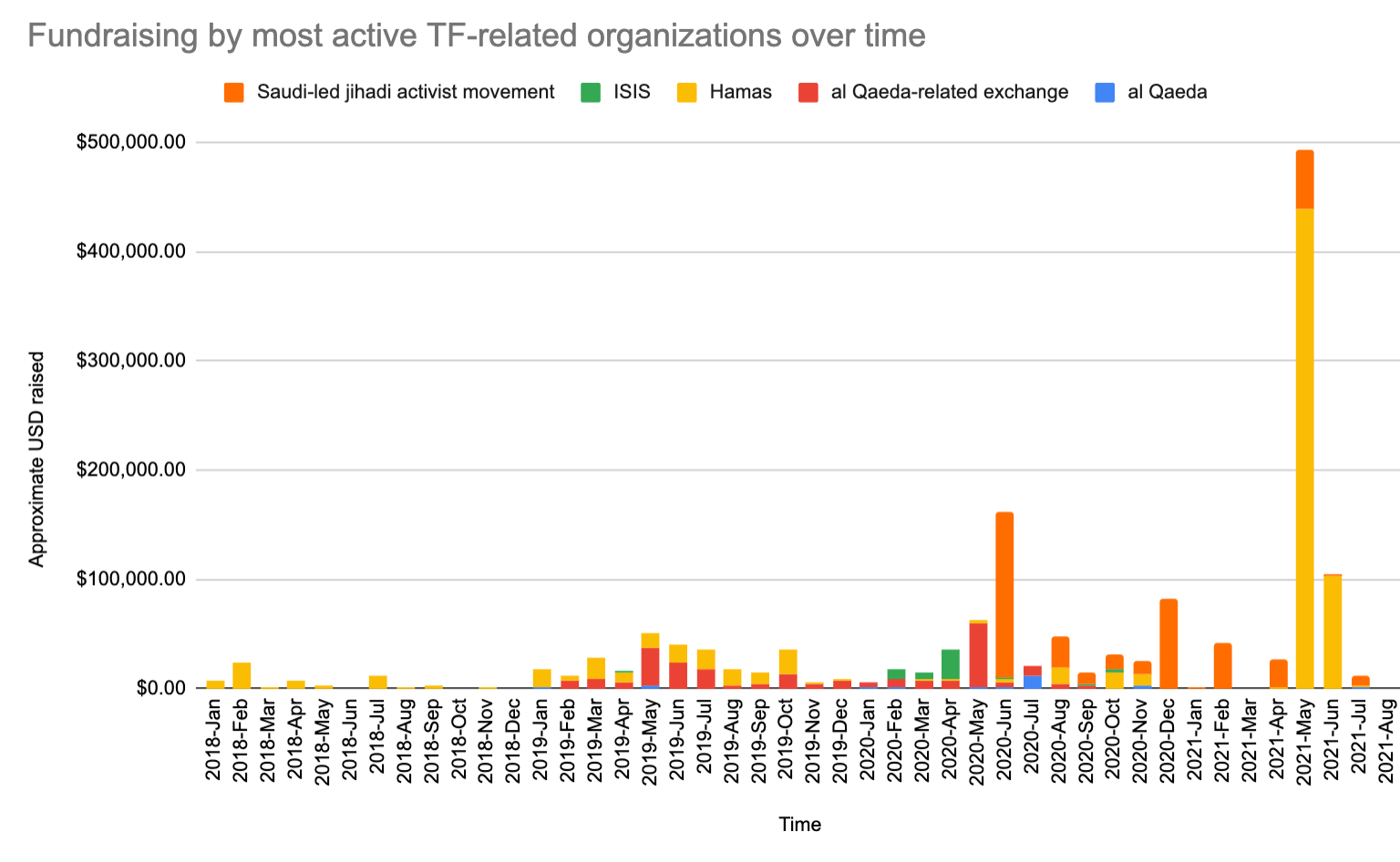 Periods of intensified fundraising activities by Hamas appear to correlate to the time frames of the most intense geopolitical conflict. 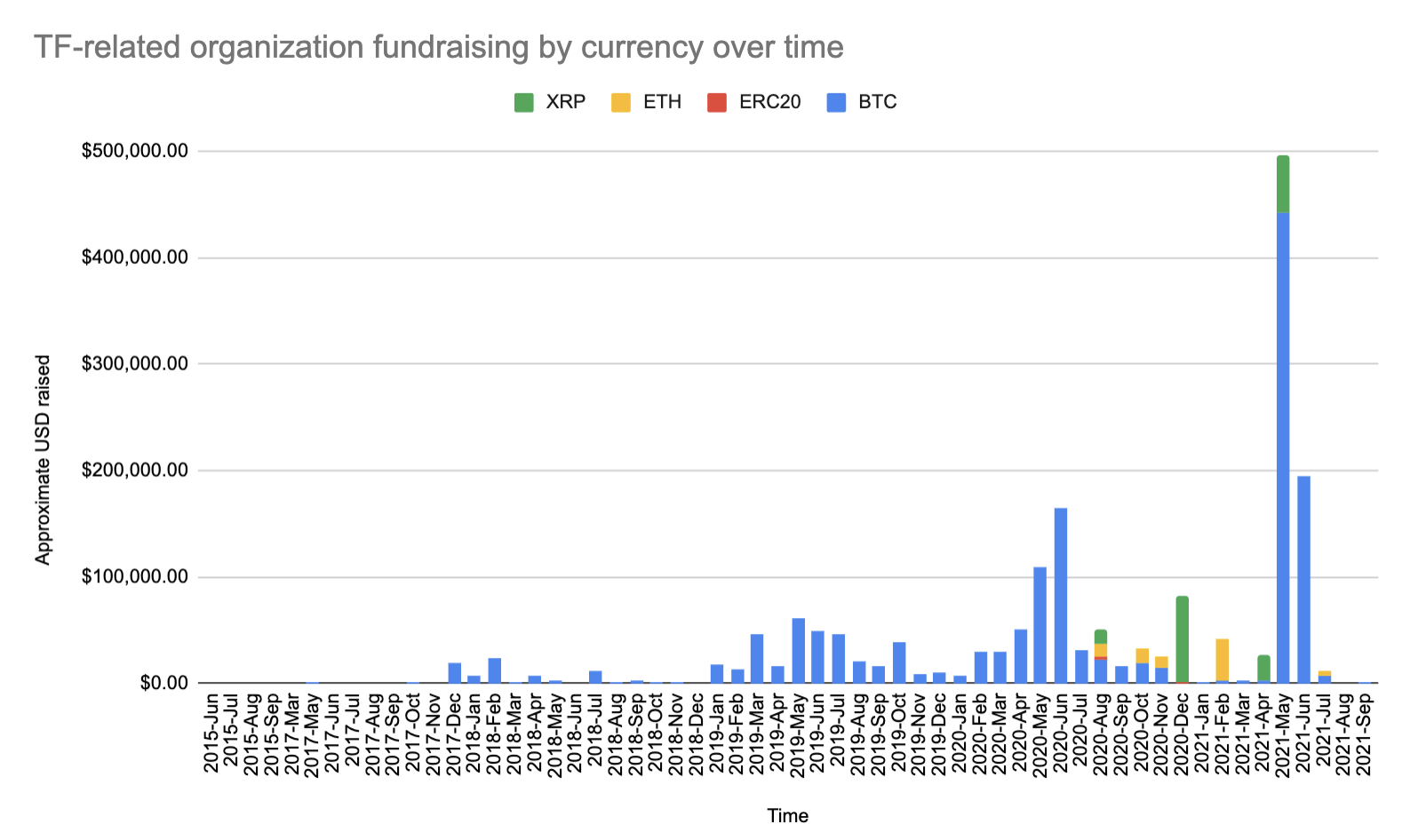 Beginning in August 2020 through August 2021, terror organizations began receiving ETH, ERC20 tokens, and XRP donations. This fundraising can solely be attributed to a Saudi-led jihadi activist movement, which began soliciting donations in the form of BTC, ETH, XRP, and various ERC20 tokens in 2020. The movement’s leader has advocated for the recent Taliban uprising in Afghanistan and appears to have incited violence against governments and countries, including Pakistan, Israel and the US on Twitter. A previous website belonging to the movement website was cited in a West Point study of Islamic terrorism.

Breaking down this movement’s fundraising by currency, we find that they have primarily raised funds in altcoins. 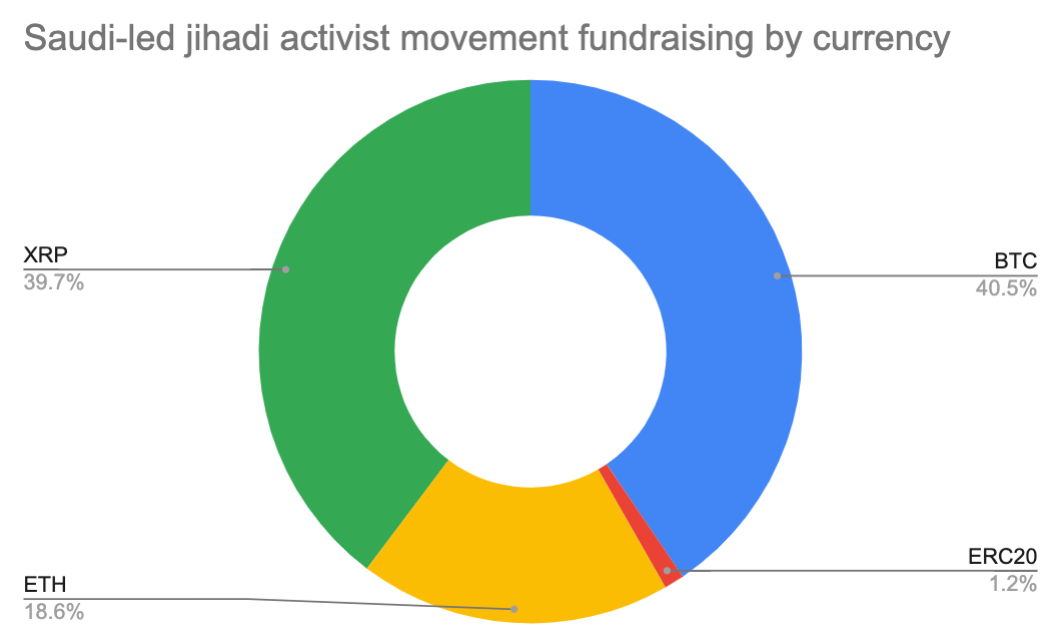 What Coinbase is doing about this

Coinbase is committed to minimizing — and ultimately ending — the use of crypto as a fundraising tactic for terrorist actors. Coinbase does not just actively research and identify trends in TF, we also take action. Preventing TF is a team effort that includes the Coinbase Special Investigations and Global Intelligence teams. After identifying a terror funding campaign, Coinbase takes at least three critical steps:

When it comes to terror funding, it is important to be accurate, but swift. Thanks to blockchain analytics, we can trace and accurately identify TF campaigns and do our part to stop them. TF may only make up less than 0.05% of all illicit activity, but it is and will always remain one of our highest priorities at Coinbase.