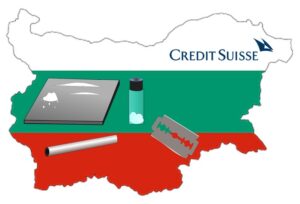 Switzerland’s prosecutor indicted Credit Suisse for laundering money from trafficking cocaine by a Bulgarian organized crime network. The Swiss bank rejected the accusations against both it as well as one of its former bankers.

Switzerland’s attorney general indicted the Zurich-based bank in connection with a 12-year-long investigation into drug trafficking and money laundering of the proceeds, the prosecutor said in a statement on Thursday. An unnamed ex-Credit Suisse executive as well as two alleged members of the criminal organization were also indicted, the attorney general said.

Swiss investigators said a Bulgarian former elite wrestler began building up a ring of cocaine trafficking between South America and Europe shortly after 2000. The bank is accused «of failing to take all the organizational measures that were reasonable and required to prevent the laundering of assets belonging to and under the control of the criminal organization.»

The case appears to center on Evelin Banev, the «Cocaine King» of Bulgaria. Banev was first convicted of trafficking drugs in 2013 in Sofia. The Swiss attorney general, which didn’t identify Banev by name, said the key suspects are a Bulgarian wrestler who for a time lived and worked as a laboror in Switzerland’s Valais, as well as his employer.

The prosecutor over time widened the investigation, dubbed «Bulco,» to include an ex-banker and people close to the two suspects including an ex-wife, sister, confidant and financial adviser, and a Credit Suisse executive.

The prosecutor alleges a relatively simple rinsing scheme: the drug proceeds, often in small-bill euro notes, were paid into Swiss accounts controlled by the crime syndicate and then in turn flowed into legal circulation to buy real estate in Bulgaria as well as Switzerland. The former Credit Suisse executive, a female, helped rinse more than 104 million Swiss francs, according to the indictment.

She oversaw transactions despite «strong indications» the funds were ill-gotten and hobbled attempts to report suspicious activities to MROS, a financial crime unit devoted to money laundering. She also actively helped the crime syndicate by feeding millions into so-called back-to-back credit structures, which hid the origin of the funds, the prosecutor alleged.

The bank said it was astonished at the charges: «The bank rejects the allegations about supposed organizational deficiencies and intends to defend itself vigorously,» it said in its own statement. Swiss officials and the financial regulator can order Credit Suisse to disgorge profits, and criminal court can impose an up to 5 million Swiss franc ($5.7 million) fine.

The investigation at the bank focuses on alleged crimes between 2004 and 2008. It was expanded to include two former Credit Suisse employees and, since 2013, includes allegations the bank’s defenses were inadequate. The bank said «it is is convinced that its former employee is innocent,» and noted that an investigation into a second employee had been dropped.

Bulco is the latest Swiss probe that Credit Suisse, where Thomas Gottstein took over as CEO ten months ago, is snagged in. The Swiss prosecutor is also reportedly looking into the bank’s dealings in Mozambique, where a scandal over financing a fishery fleet blew up.

Credit Suisse is in the crosshairs of an oligarch and former client who is demanding civil damages over a rogue banker. The bank is also under regulatory scrutiny for a spy scandal which promoted the exit of several top executives including ex-CEO Tidjane Thiam in February.