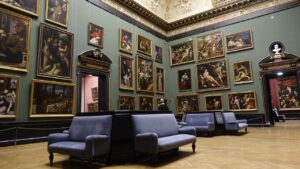 France’s highest court has ordered a retrial of members of the art-dealing Wildenstein family who were acquitted of tax fraud in 2018.

Guy Wildenstein, a close friend of former president Nicolas Sarkozy, and other family members, known in France as “les W”, were cleared of hiding an estimated €550m from the French tax authorities in offshore accounts in 2017 – a decision upheld on appeal.

In what was described as the “trial of the missing millions”, Franco-American Guy, 74, appeared alongside his nephew Alec Jr, and his brother Alec’s widow Liouba Soupakova. A notary, two lawyers and two managers of trust funds held in Guernsey and the Bahamas were also in the dock.

The accused, who denied the accusations, faced up to four years in jail. The public prosecutor asked for Guy Wildenstein to be fined €250m (£226m) and demanded that the family hand over €616m in unpaid tax.

The trial collapsed after the judge ruled there was insufficient evidence that the accused knowingly committed tax fraud and ruled that there had been failings in the investigation. In 2018 an appeal court upheld the acquittal.

France’s highest court, the cour de cassation, on Wednesday annulled the acquittal and ordered a retrial.

The family is known for both its unrivalled collection of old masters’ paintings and its squabbling, including the bitter 1999 divorce of Alec and his wife Jocelyn Perisset, whose penchant for bizarre facial cosmetic surgery made headlines.

The dynasty’s wealth was amassed by Guy’s great-grandfather, Nathan Wildenstein, a cloth merchant from Alsace whose passion for collecting art was passed on to his son, Georges. Georges became a patron of Pablo Picasso, Salvador Dalí and Max Ernst.

Georges fled to the US when the Nazis invaded France, and his son, Daniel, added works by Renoir, Caravaggio, El Greco, Rembrandt, Van Gogh and Monet to the family treasures, creating one of the world’s biggest private art collections.

When Daniel Wildenstein died, his second wife and widow, Sylvie, fell out with her stepsons, Guy and Alex, and accused them of tricking her out of her inheritance. She reported her suspicions to the French tax authorities. French tax investigators say they found assets more than 10 times the €40m inheritance that the family had declared.

Among the family assets outlined in court were a 30,000-hectare private compound and wildlife sanctuary in Kenya, where parts of the film Out of Africa were shot, racehorses, stables, a New York apartment, dozens of paintings and a Gulfstream jet.

Guy Wildenstein’s lawyer, Hervé Témime, said Wednesday’s decision would give him the chance to “obtain another acquittal” for his client.

By Kim Willsher, January 6, 2021, published on The Guardian