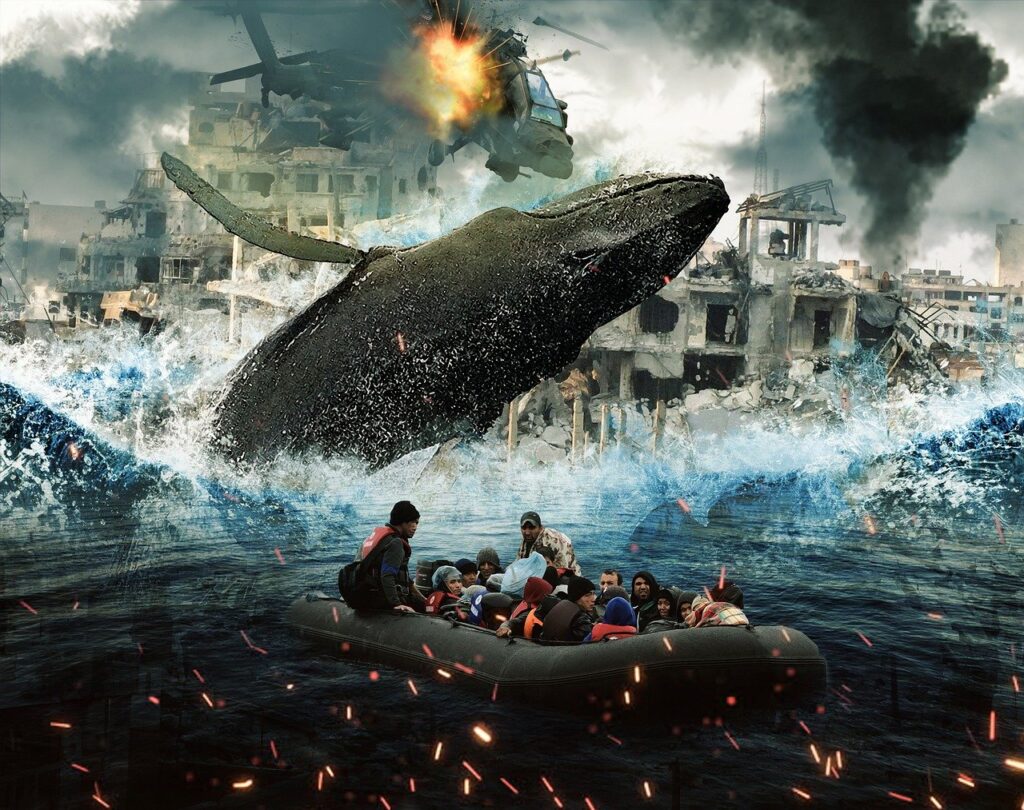 The war in Syria has now dragged on for a decade. The conflict has led to more than six million people being displaced within the country’s borders, and a similar number have fled the country as refugees. That’s equivalent to the entire population of Bolivia, or Belgium, being forced from their homes.

Those who stayed have experienced years of conflict, poverty, and terrorism. Since the first uprising against the regime in 2011, the unrest has devastated the country.

Some estimate the cost of reconstruction could be anywhere between $250 billion and $400 billion (USD). That figure dwarfs the Syrian national budget, but the international community has declined to help reconstruction efforts because of the refusal of President Bashar Assad to stop the war and secure the peaceful transfer of power.

“Syria’s population — those that have been the most affected and are the most in need — received only the crumbs.” — Investigative journalist Mohammed Bassiki

To address some of the shortfall, the Syrian regime imposed a reconstruction tax on the pretext of compensating those who lost their homes during the war. But an investigation by three nonprofits — the Organized Crime and Corruption Reporting Project (OCCRP), the Syrian Investigative Reporting for Accountability Journalism Association (SIRAJ), and London-based Finance Uncovered — found that most of the revenue raised by these taxes was diverted, with some used for military purposes.

GIJN’s Arabic Editor Majdolin Hasan talked to Mohammed Bassiki, founder of SIRAJ and one of the story’s producers, about the methodology used for the investigation, and how working together allowed the groups to interrogate the finances of a secretive regime.

MH: What led you to start investigating this story?

MB: In September 2018, I was invited to London by Finance Uncovered to attend a specialized training event on economic journalism and in-depth investigative reporting in the areas of tax systems, tax evasion, tax havens, and cross-border corporations.

At around that same time, I came across some official papers indicating how tax had become vital to the Syrian government’s income. The decline in investment and the collapse of the economy following eight years of war had created an unprecedented economic and humanitarian disaster in the country.

To counter the deterioration in the country’s fiscal position, the government was imposing new taxes on the population and on companies, in part to try and restore public finances which had been devastated by the impact of the war and Western sanctions. Among the taxes they introduced was the so-called reconstruction tax, which was levied at 5% as both direct and indirect taxes, and later increased to 10%.

“Through a sequential examination of the official spending figures, and what is published through open sources, I discovered that there was misplaced spending.” — Bassiki

Calling it a “reconstruction tax” at a time that the war was still ongoing, with battles on various fronts still raging, was rather remarkable. How can the reconstruction of a country take place while it is still witnessing devastating battles between various groups?

MH: What was your hypothesis, and what did you need to do to prove it?

MB: I wanted to really verify the truth of what the government was saying about this tax, which they said was designed to fund the reconstruction of homes. We developed a set of questions: Did the money collected from war-weary citizens really go towards the reconstruction of their destroyed homes? When, and where? How much was actually spent? What mechanism was used to monitor the finances? And who took charge? I also wanted to know who contributed the most from the major companies still operating in Syria, including the 14 private banks established by Arab and international partners, as well as two major communication companies. This was where the investigation began.

MH: How big a challenge was it to find the evidence to prove that your hypothesis was correct? How did you manage to reach the primary sources close to the story and access the documents you needed?

MB: The biggest challenge from the start was finding documents, especially regarding the size of the contributions of large companies to the reconstruction tax pool. I also needed to find out the total amount of money collected by the Syrian government from taxpayers, whether individuals or companies. I needed official documents issued by official public and private bodies for each year starting from 2013, the year in which the law relating to the reconstruction tax was passed, in order to form a realistic estimate of the tax revenue figure.

After securing this information, the next important element analyzed how much had been spent, and how much was supposed to have been spent, on the reconstruction of the country. For this we relied on open sources of information.

MH: The investigation found that the Syrian government misspent reconstruction money by allocating much of it for general governmental and military purposes. How did you follow the money trail?

MB: This is what I wanted to prove from the beginning: Was the tax money really spent on reconstructing the destroyed homes of Syrians affected by the war, those who had been displaced, and made homeless domestically? How was it meant to be done under the law? I found that in countries with a lack of transparency, while laws are often written well, and they sound good, the implementation is completely different.

By looking at the records published by government ministries responsible for the reconstruction file as a whole, a sequential examination of the official spending figures, and what is published through open sources, I discovered that there was misplaced spending, where funding went to areas that have become a priority for the government. In contrast, if you go to certain neighborhoods in the capital Damascus and other [provinces], there is still rubble, you can see the houses that have been destroyed that have not been reconstructed.

MH: You mention in the story that the limited data provided by the government, and a lack of transparency, made parts of the investigation difficult. How did human sources help you understand what was happening?

MB: We were searching for primary sources or secondary information in the face of a lack of transparency, hostility to the press, and all the while being conscious of the high levels of corruption in the various state agencies. That makes it difficult for you as a journalist to understand what is really happening. You have the information you think is the whole story, but you also need to understand the context.

So I had to talk to independent experts who have looked at the reconstruction of countries that went through wars and thrived later on, and those whose experiences are similar to those in Syria, such as Germany during World War II, Lebanon, and others, as well as experts who closely examine government finances, spending, and revenue. I needed to get to the bottom of how the lack of transparency in disclosure and the violation of laws affected this issue. Secrecy is a magic formula for endless corruption and greatly affects the most vulnerable in the local population.

MH: How did the collaboration between SIRAJ, OCCRP, and Financed Uncovered help the investigation?

MB: The idea and the hypothesis came from SIRAJ. This was then developed with Finance Uncovered, so that the process of verifying the hypothesis became a common task between us, and this included developing a systematic plan to collect the figures and information related to the reconstruction tax from banks and large companies over a period of seven years. Then we worked together to tabulate, sort, and audit the data, and draw the final results through which the hypothesis of the investigation was proven.

“Make sure the documents and information you collect are stored in a safe place, and keep a backup copy somewhere else.” — Bassiki

After verifying the hypothesis, OCCRP joined the team and worked with us to investigate where the money was going. It turned out the government itself, and its various ministries, absorbed the largest volume of tax revenues. Syria’s population — those that have been the most affected and are the most in need — received only the crumbs.

The diversity of experiences from the participating institutions was a decisive factor in pushing the story forward from the beginning and in the production stages, from initial research and gathering of information and documents to interviews and confrontation, then analysis, editing and fact-checking, and publishing.

Daraj, the Lebanese website, helped publish the Arabic version with a multimedia version that includes visual explanations, and a video explaining the most important results, and promoting the story on social media. Eventually, it was also published by The Guardian in the UK.

MH: In the investigation, we don’t see a government response. Why is that?

MB: Unfortunately, they did not respond. Twice. We directed our questions to various officials, but they did not give a response, which we indicated in the story.

MH: What are your tips for journalists doing accountability reporting in war-affected countries like Syria?

MB: Considering that what matters most to journalists working on investigations like this is finding the facts and the evidence needed to prove their story, there are risks to be aware of, some related to the work environment, some related to sources and digital security.

There is a golden rule that your life as a journalist is more important than any story. The stakes must be measured, and reporters should bear this in mind and be prepared to kill the story if it is too risky, and move on. Think of it as a triangle with three sides: on one side, you need to make sure you yourself are secure; on the second, that the sources you communicate with are safe; and, third, ensure that the team working with you is safe. In investigative projects, boldness is required, but there must be no recklessness, and there is a difference between the two.

“In investigative projects, boldness is required, but there must be no recklessness, and there is a difference between the two.” — Bassiki

In war environments, it is difficult to work as a team and to be impartial and non-partisan. But professionalism in journalistic work is what saves you from mistakes and, therefore, imminent danger. Verify the facts and do not spread misinformation that may fuel conflict and pose a risk to you, your organization, and your team.

In order to be organized, you must plan. Constant planning for each step and stage of the work — and knowledge of a story’s potential negative and positive impacts — ensures all parties involved in the work are on the same page. That way you can concentrate your efforts and make sure time isn’t wasted or work duplicated.

Lastly, make sure the documents and information you collect are stored in a safe place, and keep a backup copy somewhere else.