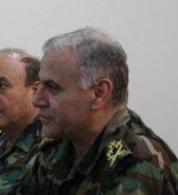 A Lebanese judge has filed corruption charges against eight former high-ranking security officers, including an ex-army chief and the former top brass of army intelligence, two judicial sources familiar with the matter said.

The officers were formally accused of “committing the crime of illicit enrichment and exploiting their official positions to accrue vast fortunes and sums, by using their influence and accepting bribes”, one of the sources, who spoke on condition of anonymity because they were not authorised to speak to the media, told Al Jazeera on Wednesday.

They were also accused of “bringing officers into the Lebanese army in exchange for large sums of money and providing services to influential people in return for personal benefits”, the source said.

High-level charges against a former army commander and intelligence heads are unprecedented in Lebanon, where corruption is notoriously prevalent but accountability is elusive.

A Lebanese army spokesperson declined to comment. A General Security spokesperson said they had no information to provide. Al Jazeera was unable to reach the eight defendants.

The charges are based on preliminary investigations by Lebanon’s public prosecution office, which decided it had enough evidence to file public charges, the second judicial source told Al Jazeera.

The public prosecution relied among other things on information provided by politicians, written and visual media reports and other information on “large fortunes the defendants made during their time in office”.

The first judicial source said the judges’ suspicions were aroused by the “large number of properties and cars” owned by some of these individuals, in addition to the “large bank balances” they are reported to have – none of which could have been accrued with their state salaries or benefits alone, nor explained by family wealth.

Beirut Judge Ziad Abu Haidar filed the charges and transferred the case to Beirut Investigative Judge Charbel Abu Samra, who is tasked with setting a date for interrogating the former officers.

Under Lebanon’s Illicit Enrichment Law, the former security officers would be investigated and tried in civilian courts, rather than the Military Tribunal that is the usual avenue for cases involving security forces, the second source said.

The case against seven former top army officers is a blow to the image of the Lebanese army, which is seen locally as one of the few state institutions that are not pervaded by fraud.

The army is largely funded by the United States and other Western nations, and Kahwaji himself received training in the US, the United Kingdom, Italy and Sweden.

The charges also raise the issue of malpractice in the country’s security institutions at a time when many are calling for security chiefs and other top officials to be held accountable for an explosion at Beirut’s port in August that killed 200, wounded more than 6,500 and wrecked large parts of the capital.

Judicial Investigator Fadi Sawan, the lead investigator in that case, has not filed charges against security chiefs despite them being aware of the presence of highly explosive material at the port for many years but failed to remove it.

Sawan has arrested 25 and charged 33 low- and medium-level administrative and security officials – many simply for their knowledge of the material’s presence.

The army is directly concerned with the disposal of explosive material.

Kahwaji was the armed forces commander from the time the material entered the port in late 2013 till he was replaced in 2017, but he has not been questioned by Sawan.

The first judicial source said Sawan had previously attempted to bring Kahwaji in for questioning, but the former army chief was travelling at the time.