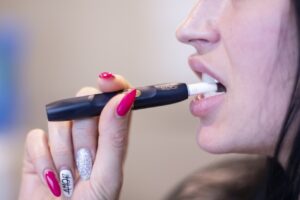 In July this year, senators in Rome received a letter from the local head of tobacco company Philip Morris, containing what he promised was “very important news for Italy.”

“The FDA clearance confirms that IQOS, although not without risk, is a fundamentally different product from cigarettes,” wrote the president of Philip Morris Italy, Marco Hannappel.

“The FDA’s decision further contributes to the growing international consensus of independent science that IQOS is a better choice than continuing to smoke.”

PMI wasn’t just celebrating in Italy. In September, Colombia’s Ministry of Commerce, Industry and Tourism received a similar letter celebrating the “historical decision taken by the FDA for the first time” to grant this authorization for an alternative to cigarettes.

The letters, obtained by OCCRP’s partners, the Italian investigative TV program Report and Colombia’s Cuestión Pública, are the latest evidence of PMI’s push to market IQOS — which heats tobacco but actually doesn’t set it alight — as a supposedly healthier alternative to smoking.

PMI also went on a media drive to highlight the FDA’s decision, releasing press statements heralding the announcement as a “public health milestone” and featuring in laudatory news stories published across at least seven key IQOS markets. “Success for the tobacco heaters,” read one headline in the online version of the German medical newspaper Ärzte Zeitung.

But the PR offensive wasn’t just aimed at promoting IQOS. It was also part of the tobacco industry’s push to ensure the new generation of heated tobacco products (HTPs) are taxed less than cigarettes, on the basis that they do less damage to people’s health.

Tobacco control experts have criticized the FDA’s decision, arguing it “amounts to endorsing HTPs” even though there is insufficient evidence to prove they benefit the health of the population.

Yet the tobacco industry has used this argument with remarkable success, depriving governments of hundreds of millions of dollars of potential revenue. PMI has used sponsored scientific studies, lobbying, and now the FDA’s decision to this end — even though the agency and its advisory committee have twice declined to classify IQOS as less risky for consumers.

“There’s a regulatory void on heated products,” said Anca Toma, president of the NGO Smoke Free Partnership. “For a preferential tax, the industry will always invoke the so-called low impact on health.”

PMI’s Vice President of Strategic & Scientific Communication, Moira Gilchrist, said the FDA’s decision followed a comprehensive review of laboratory data, clinical research, a public meeting, and investigations into how smokers use IQOS. Outside the U.S., she said PMI’s marketing around “the reduced risk of IQOS products compared to continued smoking” was in line with local laws and regulations.

The FDA said it had authorized the use of IQOS in the U.S. after a “rigorous science-based review” which found “the products produce fewer or lower levels of some toxins than combustible cigarettes.” However, it said PMI had not proved the device posed a “reduced risk of tobacco-related disease or harm.”

“There is no direct clinical or epidemiological evidence of risk reduction, and the available evidence is insufficient to demonstrate that IQOS … will significantly reduce harm and risk to individual users and benefit the health of the population,” the agency told OCCRP. 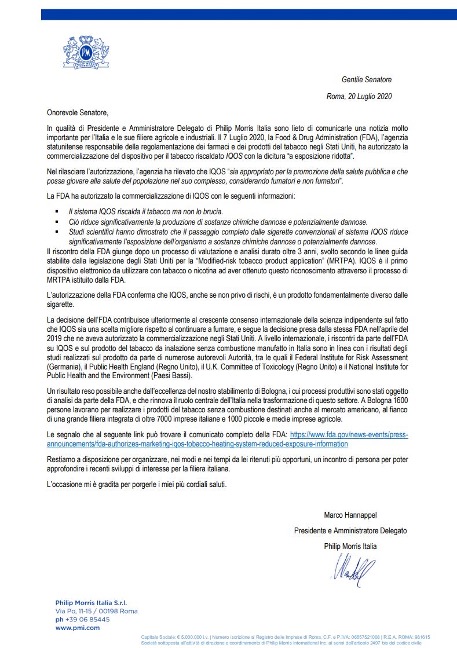 Manufacturers have been trying to sell purported healthier ways to consume tobacco since the ’90s, when they were forced to admit cigarettes are dangerous after studies proved irrefutably that smoking causes cancer, lung disease, and heart conditions.

“Our view remains that the amount of the excise tax increase is inexorably tied to the costs of healthcare reform: as the latter goes down, so will the former,” reads one documentfrom PMI from 1994 held in the Truth Tobacco Industry Documents archive.

The following year, Steve Parrish, PMI’s then senior vice president of worldwide regulatory affairs, told the board of directors the company must “fight aggressively, with all available resources, against any attempt … to diminish our ability to manufacture our products efficiently and market them effectively.”

“We are also becoming more and more proactive in launching programs that will shape regulation down the road or eliminate its need all together,” he said.

Three years later, in 1998, PMI launched Accord, its first device that heated tobacco instead of burning it. An internal report from 1999 shows that Philip Morris EU was already looking to exploit loopholes in E.U. tobacco regulations to ensure Accord faced lower taxes than cigarettes.

The duties imposed on tobacco are intended to push up the price of harmful substances like cigarettes and alcohol to make them less attractive for consumers and to raise money to pay for projected healthcare and social costs to the state.

These so-called “sin taxes” are used “to deter consumers from consuming the products in question” and “to raise funds for the government,” explained Rob Branston, senior lecturer in Business Economics at the University of Bath School of Management.

“If you tax a product a certain way, that is to raise revenue that pays for the societal cost,” added Ulrik Boesen, a senior policy analyst with the Tax Foundation, a U.S. think tank. “If you get it wrong, you’ll end up hurting not only public health, but also the taxpayers.”

In 2018, the 182 countries that signed up to the Framework Convention on Tobacco Control (FCTC) agreed HTPs should not be treated differently from other tobacco products. Toma, from Smoke Free Partnership, said this means they should be taxed like cigarettes.

But PMI has lobbied hard to ensure IQOS is seen as less sinful than its other tobacco products.

OCCRP’s Blowing Unsmoke series found the company has courted doctors in Italy and Romania, presented at medical conferences, and sought to take advantage of legislative gray areas to market IQOS. This year, PMI has even tried to leverage the coronavirus pandemic to convince more people to switch to using the “healthier” heated tobacco device.

“They’re pushing this substitution,” said Boesen. “They want smokers to move on to harm reduction products.”

PMI has relied on sponsored scientific studies to back its claims — even in its submission to the FDA. Reporters found that nine out of the 12 articles and other material referenced in the body’s decisions were written by people with links to the tobacco industry or draw on other studies on HTPs and e-cigarettes sponsored by the industry.

PMI’s Gilchrist said the FDA decided to classify IQOS as “modified risk” after “a comprehensive review process lasting over three years and involving the scientific review of over a million pages of scientific research,” including evidence the company submitted as well independent studies and a public review meeting. 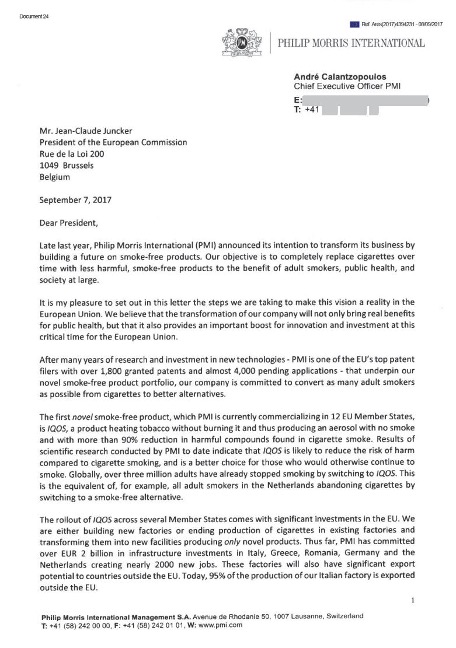 The tobacco industry has already been remarkably successful in its push to get HTPs taxed at lower rates than traditional tobacco products.

They are taxed at lower rates than cigarettes in all of the 10 countries covered in OCCRP’s Blowing Unsmoke project, despite the lack of reliable evidence that they reduce the risk to people’s health. This has resulted in millions of euros in losses in potential government revenue.

Attempts to raise taxes on HTPs have also failed. In Romania, an amendment that would have increased excise duties on them to 80 percent of the amount imposed on normal cigarettes by 2024 was rejected by MPs in October. The proposal for the amendment predicted it would raise over 200 million euros per year for the national budget over four years.

Italian lawmakers also voted down a proposal to raise HTP taxes to a level approaching cigarette taxes during the coronavirus pandemic, which would have gone towards a 300-million-euro fund to provide home nursing care for the elderly, disabled, and other at-risk populations. It was rejected twice, even though Italian authorities had turned down PMI’s application to have IQOS classified as less risky than cigarettes.

PMI was lobbying the then European Commission President Jean-Claude Juncker about IQOS as early as 2017.

Part of the problem is that there is no international standard on how HTPs should be taxed or regulated. Even in the European Union, which imposes health regulation standards for all its members, countries have taken different approaches as they try to navigate competing directives at a bloc level, national laws, and pressure from tobacco industry lobbying.

PMI has tried to take advantage of this confusion. In 2017 the company was already lobbying the president of the European Commission at the time, Jean-Claude Juncker, as well as his first vice president, Frans Timmermans.

“The classification of the EHTP as a cigarette or other combustion product could be incorrect on technical grounds, could have negative economic consequences for the EU, and moreover, cannot be justified in any way from a public health perspective,” Peter van den Driest, director of corporate affairs at Philip Morris Netherlands, wrote to Timmermans in 2017.

Most health authorities, however, still seem unconvinced. Last year the World Health Organization wrote that, “given that the newer generations of products have not been on the market for long enough, evidence on their health impacts is sparse.”

Michal Stoklosa, a senior economist at the Institute for Health Research and Policy, part of the University of Illinois in Chicago, says HTPs will only be a boon for public health if they help users quit smoking entirely.

“We see a lot of smokers using cigarettes and HTPs concurrently,” he wrote. “There is little risk reduction in such behavior.”

by  Andrei Ciurcanu and Alessia Cerantola, 8 December 2020, published on OCCRP