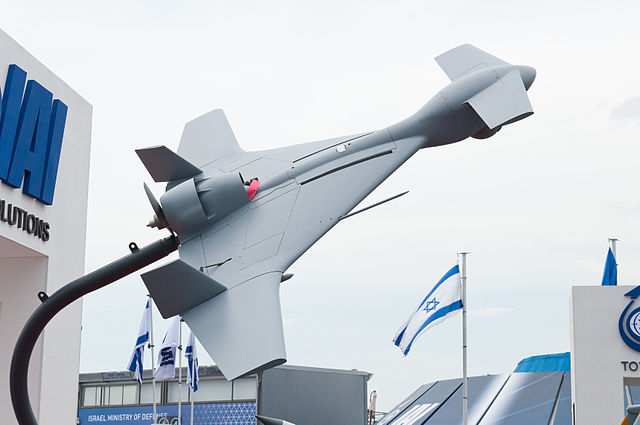 Last month, The Times of Israel reported that Israel’s largest aerospace manufacturer, Israel Aerospace Industries, transferred at least $155 million in 2012-2014 to two companies that were reportedly used as a secret slush fund for Azerbaijan’s kleptocratic elite.

In addition, Important Stories has reported, the bank accounts for these two offshore companies were serviced by the Russian bank International Financial Club, which is part owned by the wife of Sergei Chemezov, the CEO of Russia’s state-owned arms manufacturer and exporter, Rostec. In other words, a bank that is partly owned by the wife of a US-sanctionedPutin ally performed a key role in suspicious payments from two state-owned Israeli arms manufacturers to offshore companies reportedly controlled by members of the Azeri elite.

The Important Stories report is based on a suspicious activity report (or SAR) filed by The Bank of New York with the Financial Crimes Enforcement Network of the United States Department of the Treasury (FinCEN) in December 2017. The SAR became public as part of a leak of FinCEN documents that the BuzzFeed news site shared with the International Consortium of Investigative Journalists (ICIJ) and with 108 other media outlets and some 400 journalists around the world. Important Stories is the ICIJ’s partner in Russia.

The submission of a suspicious activity report to FinCEN does not mean that the individual or company mentioned in the document has done anything illegal. The transactions described in such reports can be part of entirely legitimate business activities that happened to conform to patterns that aroused the suspicion of the financial institution reporting them.

According to the Important Stories report, in December 2017, The Bank of New York filed an SAR concerning a $5 million payment from IMI Systems Ltd. to the British Virgin Islands company Jetfield Network.

Jetfield Network was founded in New Zealand in 2009 and was later incorporated in the Marshall Islands in February 2012. It originally described itself as engaged in commerce, including the buying and selling of construction equipment, but later branched out into “consulting services.”

The company’s beneficiary is Javid Huseynov, an Azeri man born in 1961. Huseynov is also the beneficiary of Larkstone Ltd., a company incorporated in Estonia, according to reporting by journalist Uri Blau and Hashomrim-the Center for Media and Democracy, which is ICIJ’s partner in Israel. Huseynov does not have much of a public profile and the Important Stories report suggested that he may be a nominee owner.

As reported by Blau and Hashomrim, Jetfield and Larkstone together received over $150 million in payments from Israel Aerospace Industries in 2012-2014, shortly after the company signed a $1.6 billion arms deal with Azerbaijan.

Important Stories further revealed that from June 2016 to May 2017 Israel Aerospace Industries paid $ 2.8 million to a British Virgin Islands firm called. Bakinshaat Group Ltd., whose website describes it as a construction company involved in government projects in Azerbaijan. According to Important Stories, all three companies, Jetfield, Larkstone and Bakinshaat Group, had bank accounts with International Financial Club.

Jetfield and Larkstone were revealed in a 2017 expose by the Organized Crime and Corruption Reporting Project (OCCRP) to be central nodes in what became known as The Azerbaijani Laundromat.

The OCCRP revealed that Jetfield and Larkstone paid money into companies that were used as a slush fund by cronies of the regime of Azerbaijani President Ilham Aliyev to purchase luxury goods as well as to buy good PR for the regime.

For instance, more than 2 million euros that left Azerbaijan, with a portion going through Jetfield, reportedly ended up in 2012 in the bank account of Italian politician Luca Volontè, Rome’s representative to the Parliamentary Assembly of the Council of Europe (PACE). Italian police suspect that in exchange for the payment, Volontè tried to soften the European Council criticisms of human rights violations in Azerbaijan. The investigation, launched in 2015, is ongoing.

According to Important Stories, it is odd that while Jetfield Network is registered in the British Virgin Islands, it was serviced by the Russian bank International Financial Club.

International Financial Club’s main shareholder is a businessman by the name of Mikhail Prokhorov (he owns 47.8%). Interestingly 6.5% of the company’s shares are owned by Ekaterina Ignatova, the wife of the head of Rostec, Sergei Chemezov.

Chemezov is CEO of Rostec, the state-owned Russian  conglomerate that controls weapons manufacturing in Russia. Chemezov is under US Treasury Department sanctions for being a Russian government officialand is barred from entering the United States. The Treasury Department has described Chemezov as “a trusted ally of President Putin, whom he has known since the 1980’s when they lived in the same apartment complex in East Germany.”

According to Important Stories, in 2016 compliance officers at The Bank of New York got in touch with International Financial Club to ask why a company from the British Virgin Islands was being serviced by a Russian bank and why it had received funds from an Israeli arms supplier to Azerbaijan.

International Financial Club replied that Jetfield Network had had an account with the bank since August 2015 and that its main activity was providing consulting and marketing services.

In 2009, Israel became a signatory to the OECD Convention on Combating Bribery of Foreign Public Officials in International Business Transactions, which criminalizes bribery of foreign government officials.

According to Important Stories, while it makes no sense on its face that two state-owned Israeli arms manufacturers would need a Russian bank to transfer payments to offshore companies associated with the Azeri elite, this pattern of payments suggests that “the owners of the International Financial Club and the people behind the offshore intermediaries may have a close relationship… because in such ‘delicate transactions,’ when it comes to arms shipments and payments to offshore intermediaries, it is important to have a trusting relationship with bankers so that transactions are not immediately blocked.”

The fact that an individual close to the Russian regime is linked to payments from Israeli weapons companies to Azeris raises questions of what kind of leverage or access Russia might have to Israeli state-owned arms manufacture.

Israel Aerospace Industries is a longtime collaborator with the US defense contractor Boeing in developing the advanced Arrow missile defense system.

Israeli journalist Yossi Melman recently reported in Foreign Policy that Israeli counterintelligence officials believe both China and Russia are spying on Israel, in part in order to steal US military secrets.

It has been widely reported that Israel is the top supplier of arms to Azerbaijan, including of lethal “kamikaze” drones that some analystsbelieve have helped Azerbaijan gain an edge over Armenia in the current hostilities in Nagorno-Karabakh.

The United States provides military equipment to Azerbaijan as well.

Critics of Israeli weapons sales to Azerbaijan have argued that Israel is siding with the oppressive dictatorship of Azerbaijan as opposed to its democratizing neighbor. Others have said that Israel should support Armenia, or at least not actively arm its enemy, out of respect for Jews’ and Armenians’ shared historical experience of genocide. Last week, activist Elie Yossef, a longtime critic of Israeli arms sales to despotic regimes, petitioned Israel’s High Court of Justice to force Israel to halt all arms sales to Azerbaijan immediately.

“The moment that Azeri forces invade and conquer Nagorno-Karabakh, with aerial cover and massive bombing, there will have to be a miracle to prevent massive slaughter of Armenians there,” he wrote in the petition. (While there is no evidence of genocide in the current Nagorno-Karabakh hostilities, scholars have said there is a possible genocide risk.)

Defenders of Israel’s arms sales point out that Azerbaijan is strategically located next to Israel’s archenemy, Iran. It is reported that Azerbaijan has agreed to let Israel use its airfields in the event of a potential armed conflict with Iran.

By Simona Weinglass, October 27, 2020, published on The Times Of Israel